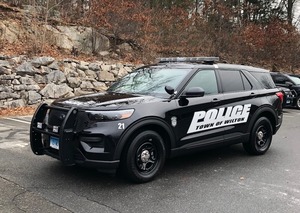 Wilton Police are excited to announce that we are one of the first agencies in Connecticut to purchase the new Ford Police Interceptor Utility Hybrid.

According to Ford the new hybrid model has an EPA-estimated rating of 23 mpg city/24 mpg highway/24 mpg combine, which is a 41 percent improvement over the current Police Interceptor Utility equipped with a conventional 3.7-liter gas engine. The new model is projected to save taxpayers between $3,500 and $5,700 per vehicle in fuel costs annually. The 2020 model is the first-ever pursuit-rated police utility vehicle with a standard hybrid engine.

Hybrid technology is ideal for law enforcement because of the potentially significant idle-time fuel savings. When police vehicles are stationary, a conventional gasoline engine must run continuously to power emergency lighting, radios, computers and other on-board electrical equipment.