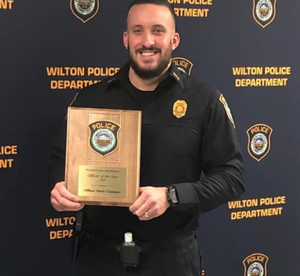 Wilton Police Department announced the 2019 Community Police Officer of the Year on their Facebook Page. Congratulations to Officer Mark Canepari!

2019 Community Police Officer of the Year

Mark began his career with the Wilton Police Department in December of 2014. He has consistently distinguished himself as a proactive officer. His distinction is particularly evident in his proactive motor vehicle enforcement. In 2019 he conducted 412 traffic stops resulting in 3 DUI arrests, 1 narcotic arrest, and the issuance of 9 infractions for marijuana possession. In addition, he has distinguished himself as a keen criminal investigator, who takes exhaustive efforts to identify those responsible for crimes. Mark also received a letter of commendation, letter of recognition and a life-saving award in 2019.

In looking through Officer Canepari’s personnel folder there are many letters from residents thanking him for the professional and caring way that he assisted them in their time of need.

Due to the COVID pandemic the Wilton Police Awards Ceremony needed to be postponed in March of this year.  This award was presented to Mark today in front of his peers at the Police Department.

The annual Officer of the Year Award began in 2003 as a way of acknowledging a member of the department who provided exceptional service. The award is granted each year to the member who distinguishes him/herself from their peers by actions which represent the highest standards of the police profession. The members recommended for consideration by supervisors must have no sustained departmental or citizen complaints for the year, must have maintained an acceptable level of productivity and a minimal level of absenteeism. One nomination for this award is submitted by each supervisor.