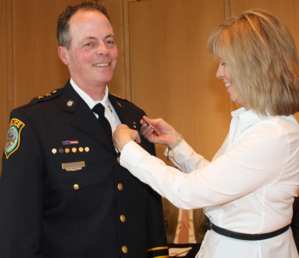 Today, Wilton Chief of Police John Lynch announced his intention to retire as of February 1st.  The announcement follows nearly thirty-eight years of service to the Wilton community, including six as Chief.

First Selectwoman Lynne Vanderslice thanked Chief Lynch on behalf of the community noting he is the embodiment of community policing and likely retires as one of Wilton’s most well-known and beloved police chiefs having earned the respect of the community, the officers and his colleagues within and outside Wilton.  She provided her personal gratitude for his commitment, guidance and leadership, particularly during difficult times.  Noting difficult times are the true measure of a leader, she shared Chief Lynch shone.

Police Commission Chair Chris Giovino shared his appreciation on behalf of current and past commissioners noting Chief Lynch is a consummate law enforcement professional. Chris stated Chief Lynch has enhanced the department’s reputation among other federal, state and local departments and nurtured a deep pool of quality patrol officers, investigators, managers and executives within the department. Chris acknowledged and commended the high standards Chief Lynch set for himself and the department and the Chief’s lifelong dedication to public safety and the community he has called home for decades.

Within the community, among others, Chief Lynch served as a member of the Wilton Volunteer Ambulance Corps, a volunteer firefighter with the Georgetown Fire Department, a volunteer with A Better Chance of Wilton and a Trustee of the Wilton Historical Society.

The Police Commission will meet this week to discuss succession.