Details
Published on Monday, 17 June 2019 13:11
Written by The Ridgefield Playhouse 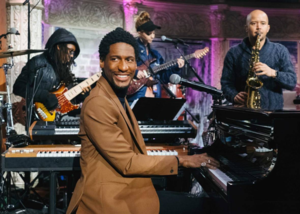 Kick off summer with dinner, open bar and a great night of live music at The Ridgefield Playhouse Summer Gala, featuring “Late Show” band leader Jon Batiste and his band Stay Human on Friday, June 21 – the first day of summer!

The gala, which benefits The Playhouse (a non-profit, 501 (c) (3)), begins at 5:30pm and includes dishes prepared by local restaurants, beverages provided by local brewers, wineries and distilleries and a chance to bid on fabulous silent auction items outside under a tent on the baseball field next to The Playhouse. Jon Batiste and Stay Human will perform in the theater at 8pm.

Batiste is a globally celebrated musician, educator, bandleader and television personality whose musical skill, artistic vision and exuberant charisma make him a triple threat with unlimited potential. Recognized for his originality, jaw-dropping talent and dapper sense of style, he transitions from commanding the piano with virtuosic skill to soulfully crooning to wailing on the “harmonaboard” (a kind of harmonica and keyboard) to curating unique "social music" experiences all over the world. Born into a long lineage of Louisiana musicians, Batiste eventually went on to receive both his undergraduate and masters degrees in piano from the Juilliard School and formed his band, Stay Human. This show is part of the Moffly Media Evening of Art Wine & Jazz Series and Pepsi Rock Series powered by Xfinity. Media sponsor for this show is WFUV.

Band leader, Jon Batiste has performed with such artists as Stevie Wonder, Prince, Willie Nelson, Lenny Kravitz, Ed Sheeran, and Mavis Staples. The Louisiana native began as a percussionist in his family’s band The Batiste Brothers Band at the age of eight. He switched to piano at age eleven and in addition to taking classical lessons began transcribing songs from video games such as Streetfighter Alpha and Sonic Hedgehog. He studied with Trombone Shorty at the New Orleans Center for Creative Arts and later attended Julliard. He made his debut at The Royal Concertgebouw in Amsterdam at age 20, producing and performing his own show and went on to conduct music classes and clinics throughout the Netherlands, eventually returning to play Carnegie Hall in New York City.

For Batiste’s latest album Hollywood Africans he worked with the legendary T Bone Burnett. Batiste states, “The goal was just to collaborate on something that felt authentic to both of us. What we came up with was an intimate, stripped-down portrait of who I am, and the lineage of musicians and performers who are really vital to my work and to his. On this record, I want us to bop, dance, laugh and cry to the sound of the music while we remember our black heroes and wield the superpowers they left us with. Because of them, I don't have to wear a mask. I get to be who I am.”

For tickets ($75- $175) call or visit the box office, 203-438-5795 or go online at ridgefieldplayhouse.org. The Ridgefield Playhouse is a non-profit performing arts center located at 80 East Ridge, parallel to Main Street, Ridgefield, CT.