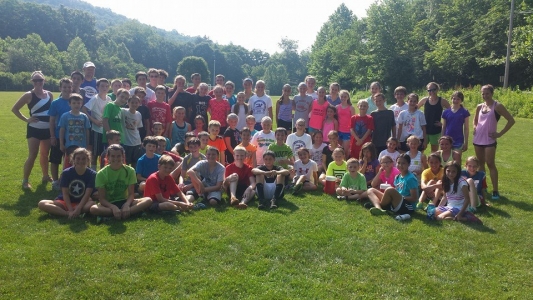 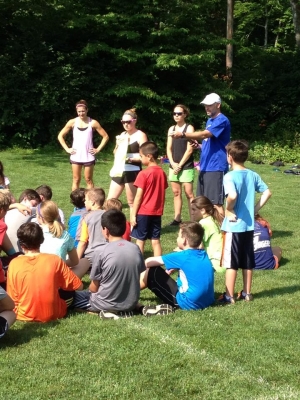 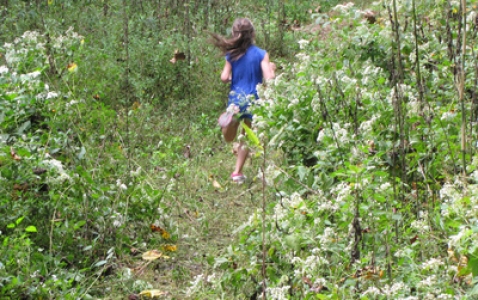 Erin and Jeromie Schumacher are still in awe that over 100 area kids are willing to start their summer days with an hour and half of running and conditioning before many of their peers have even rolled out of bed.

Middlebury husband and wife team – the "Shoes" as they are affectionately called by all who know and love them – chalk up the interest in the Nutmeg Striders Summer Running and Conditioning Camp to the running community itself and the "if you build it, they will come" mentality.

"We started the camp to keep kids in shape over the summer," Erin says, still a little in awe of the amount of kids who signed up. "But we know from experience that kids are chomping at the bit to be able to run in the summer."

Last year there were about 35-40 kids in the running camp. A separate conditioning and fitness element was well-attended, but the Shoes decided to combine the two this year and are elated at how well it's working. And with so many kids signed up, they have added a few extra coaches as well.

"Kids want to keep running over the summer and we make it a fun and enjoyable experience for them," Erin says.

Jeromie, a triathlete himself, has coached youth and high school cross country, track and field, and triathlon for over 20 years. He is a Physical Education teacher at Pomperaug High School. Erin has over 14 years of coaching experience and is a licensed Medical Massage Therapist with extensive knowledge in body mechanics and injury prevention. She is also the Cross Country coach at Rochambeau Middle School.

Their knowledge and passion for coaching kids is infectious and invaluable and they have created an all inclusive environment that is about a whole lot more than running.

Three times a week, beginning at 8 a.m., over 130 kids start their warm-ups at Semens Field in Southbury before collecting themselves and heading across the street to Bent of River Audubon Center for trail runs of varying distances.

The campers, aged five through 16 years-old, come from area towns like Woodbury, Southbury, Newtown, Oxford and Waterbury and as far down the line as Fairfield. They are grouped by age first and then placed accordingly by ability and distance. They run through the trails of the Audubon varying distances between 1 to 5 miles, helping each other along the way and cheering each other on.

"Our goal is to give them the instruction on speed and training and endurance," Erin says. "The premise is to keep kids active while empowering them in their efforts. Running is a fabulous tool to create self-confidence. It is invaluable in a team atmosphere."

A natural outgrowth of that was to incorporate Dylan's Wings of Change into the Nutmeg Striders Summer Program. Named for Dylan Hockley who was a victim of the tragic Sandy Hook Elementary School shooting in 2012, Dylan's Wings of Change is a foundation devoted to supporting children with autism spectrum disorders and related conditions. Like Dylan, the Shoes' 3 ½ year-old son Myles is on the spectrum and according to Erin, "he's our why!"

Erin and Jeromie instituted the "Wingman Program" into Nutmeg's summer camp and the result has been a real uplifting experience for all involved.

"Wingman was designed to instill leadership programs in all participants so it doesn't make it about personal bests," Erin says. "Helping other kids to stand up for each other – to become their 'Wingman."

The Shoes end each session of camp by presenting a Wingman Award to one of the campers for a job well done, not for running but for becoming that kid who goes that extra mile to do something, cheering on and helping someone who needs it. "We've already seen amazing growth in the kids and that is huge," Erin says.

Like the running community itself, Nutmeg Striders is surely a family affair. Several of the summer families have more than one child enrolled, some with three to five kids who take to the trails three days a week.

"I enjoy running and exercising with my friends in the morning," says Woodbury eighth grader J.D. Gengenbach. "The coaches never stop figuring out ways to make it fun. What makes it special is that you always have someone looking out for you and you always have an opportunity to make a new friend and help them out too."

His sister echoes her brother's sentiment. "They give you a hard workout but they make it fun," says Fiona, entering 4th grade in the fall. "It is special because there are a lot of good kids and it is easy to make friends."

Parents sometimes drop their kids off for warm-ups and then lace up their own running shoes and take to the trails for their own running solace. Pam Gengenbach, mom to JD and Fiona, jumps on the trails each day along with the group of kids and says she is thrilled to see both the growth in confidence and ability of all kids, not just her own, who participate in Nutmeg Striders Programs.

"My kids have run with all of the programs the Shoes have offered for the past three years and the kids in those groups make it all work just as much as the Shoes do – they all encourage each other and welcome new members each season very kindly," Pam says. "Now with the Dylan's Wings initiative mentoring and looking out for each other is highlighted nicely in this summer session. The kids work hard all year and during track and cross country season where they have the opportunity to compete with other athletes across the state, the region and the nation, their hard work really shines. "

Nutmeg Striders began in Southbury as Bullet Hill Striders about 12 years as a way to get young runners in Region 15 into an organized program at the middle school level. There were about five kids enrolled.

Now Nutmeg Striders has become a year-round experience for kids who don't have Cross Country or Track and Field at their own schools, like Region 15, or for those who just have that running bug.

In fact the program is so successful it will be expanding into Newtown with its own chapter next year.

"It's been a real movement about a whole lot more than running," Erin says happily. "It blows my mind what it does for their confidence and abilities elsewhere."