Are You Dense Advocacy, Inc. and Joan Lunden Join Forces on Capitol Hill 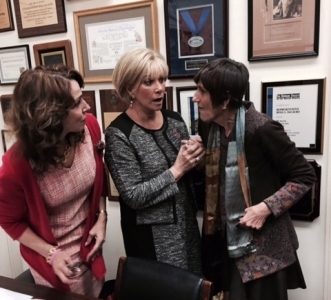 The reason the two teamed up is clear. Both share the conviction about the importance of women having knowledge of their dense breast tissue and to determine with their physicians whether or not added screening is needed to avoid missed, delayed and later stage cancer.

“We are grateful to have Joan Lunden join our effort to pass national legislation which enables all women to be informed of their breast tissue density and to have access to secondary screening,” states Cappello. “Our meeting in Washington helps further education of this important women’s breast health issue.”

Having a similar experience with dense breast tissue hiding cancer after a mammogram, Lunden recounts her story, “Last June I walked out of my 3D mammogram with a clean bill of health, then walked across the hall for my ultrasound and found out I had breast cancer. If it wasn’t for an interview I did with Dr. Susan Love five years ago, I would have never have known that since I have dense breast tissue I should be following up my mammograms with ultrasounds. None of my doctors ever told me this. It’s a scary thought to think where I would be now if I didn’t have that ultrasound.”

“There are innumerable women across this country that have unequal access to the purpose of breast cancer screening, especially if they are relying on their mammography alone to find cancer at its earliest stage,” claims Cappello. “A national density reporting law will leave no one blindsided and potentially harmed by their dense breast tissue.”