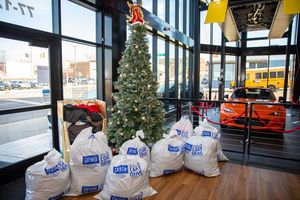 New York’s franchise new car dealers are helping to lead the way in donating winter coats to those in need, serving as the largest multi-location collection site for the 31st annual NY Cares Winter Coat Drive.

With their highly visible retail locations and deep ties to their local communities, franchise new car dealers who make up the Greater New York Automobile Dealers Association (GNYADA) account for over 10% of the total coats collected each year and are the only multi-site collectors outside New York City, extending the drive’s reach to Long Island, Westchester, Rockland and beyond.

By hosting collection sites, through strong daily customer interactions, franchise dealers have been able to dramatically scale up their collections in a short time.

Participating dealers’ yearly collection totals have steadily increased with each new campaign, reaching 194 collection sites so far this year, its highest-ever total, up from 140 in the winter of 2017-18. GNYADA member dealers make up 129 sites outside New York City, significantly broadening the drive’s reach.

The goal of the 2019-20 New York Cares Coat Drive is to surpass 105,000 new or gently used coats this winter, providing warmth for families who would otherwise face a long cold winter without one.  Franchise new car dealers collected almost 10,000 winter coats last season, and surpassed 50,000 coats donated since 2012, when they began participating in the drive.

“Our member dealers continue to outdo themselves in terms of enthusiasm and generosity, extending the reach and volume of the coat drive to help even more New Yorkers in need each year,” said Mark Schienberg, President of GNYADA. “This impressive effort is an example of the enormous charitable impact that GNYADA members have in their communities, serving as leaders in philanthropy and community service in towns and neighborhoods throughout the downstate New York region. Once again, this year, we will do everything possible to keep New York families warm as the winter cold moves in.”

It has been reported that the number of New York City school-aged children experiencing homelessness has increased dramatically since 2010, along with a rise in homelessness overall.