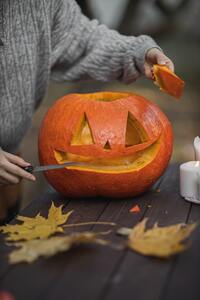 National Pumpkin Day recognizes a favored autumn decoration and food on October 26th. Not only do they make great fall decorations, but the pumpkin also completes a variety of tasty recipes. Join a pumpkin competition or visit any of the many fall festivals featuring the beautiful gourds.

As it should be. This squash is native to North America. The oldest evidence of pumpkin-related seeds dates back to somewhere between 7000 and 5500 BC to seeds found in Mexico.

The word pumpkin originates from the word pepon, which means “large melon” in Greek.

The United States produces 1.5 billion pounds of pumpkins, with Illinois producing more than any other state.

During Halloween many people pick or buy pumpkins—most often the Connecticut Field pumpkin—and carve them into jack-o'-lanterns. Vegetables such as turnips have long been carved in Ireland and Britain, and the practice of carving pumpkins into jack-o'-lanterns stemmed from the story of Stingy Jack.

Pumpkins were one of the squashes long eaten by Native Americans, which they introduced to Europeans shortly after the settlers arrived in the Americas. In fact, pumpkin pie was served at one of the Pilgrim's first Thanksgivings in the early 1620's, and is now a staple of Thanksgiving meals. A smaller strain of the Connecticut Field pumpkin, the Small Sugar pumpkin, is often used for pumpkin pie, but most Americans buy pie filling or puree in cans instead of getting it from fresh pumpkins.

Although most Americans only use fresh pumpkins for carving, there has been a growing interest in pumpkin flavored foods in recent years, which can be attributed to Starbucks' introduction of pumpkin spice latte in 2003.

Pumpkins are packed with nutrients, but they’re not only good for humans. Did you know that pumpkin may be recommended by veterinarians as a dietary supplement for dogs and cats? Since pumpkin is easy to digest, if your pet is experiencing certain digestive ailments, don’t be surprised if your vet says to give them pumpkin puree.
Poultry also benefit from eating raw pumpkin as a supplement to their regular feed during the winter months to help maintain egg production. As a seasonal food, it sure comes at the right time of year. Since it’s packed with vitamin C, it can boost your immune system to fight off those nasty colds, too.