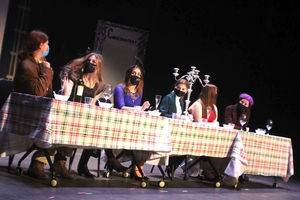 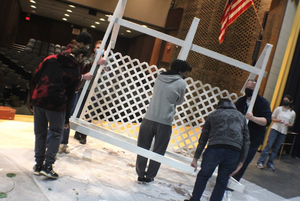 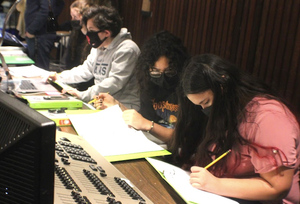 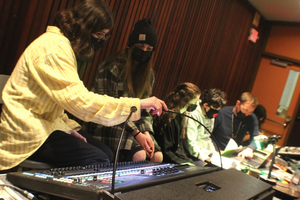 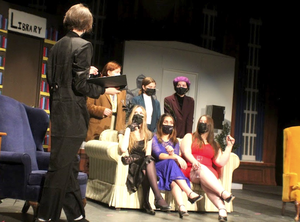 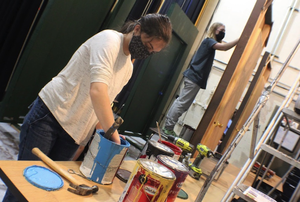 From high tech to hijinks, the Mahopac High School Drama Club's three-day production of the comedy/murder mystery "Clue" was a student-run affair.

"We pride ourselves on having the kids mostly running things," Purr said. "They build the sets, they place the sets. They handle the tech, the lights, the sound. Sometimes they help with costumes. It's different with each play we do, depending on the strengths of the kids who sign up."

Dayton Halmy, a senior and president of the student Drama Club, has been in every play since her freshman year. When she heads to college in the fall, though, she doesn't plan to major in theater.”

This is just something I love doing," said Halmy, who portrayed Mrs. Peacock, a daffy older woman. "It lets me get together with all my friends. People in sports have been able to do so much more during the pandemic. I'm so thankful to Superintendent (Anthony) DiCarlo for letting us put on this show."

Until she was cast as Mr. Green tenth grader Kaitlyn Pearsall didn't know much about the play "Clue," in which a group of dinner guests are caught up in a raucous murder and blackmail scheme.

"Before this I really just played the board game," she said.

Nonetheless, Pearsall said she was most surprised by how the stress of putting on a show could bring everyone involved together.

"You cannot get mad at anyone here," Pearsall said. "I've made a lot of friends."

Breseis Forte played the French maid. A junior, Forte has been in school plays before, but this is her first big role.

"I remember being a freshman and seeing the leads on stage testing their mics," Forte said. "I thought that was so cool. Now, I wear a mic. It feels so professional."

"Clue" had been scheduled for the fall but was postponed until Jan. 13, 14 and 15 because of construction in the high school. In just a few weeks, the drama club will start working on the spring musical, which is scheduled to open April 28.

"It's a lot," Purr said. "The kids are really into it, however. They are so glad to be back. This is the first time we've been on the high school stage in almost two years."

The drama club was just ready to open "Wizard of Oz" in the spring of 2020 when schools were shuttered because of Covid. Then the fall 2021 production of "Charlotte's Web" was videotaped without a live audience. Last spring, they performed the musical "Working" just once, for parents only, at The Falls School.

English teacher Sonya Velez has served as Assistant Drama Director for more years than she cares to remember. Still, she never forgets a play.

"This is my 42nd production at Mahopac High School," Velez said. "I know the number of shows based on the number of T-shirts that I have. Soon, I'll need a new room in my house just to store them all."