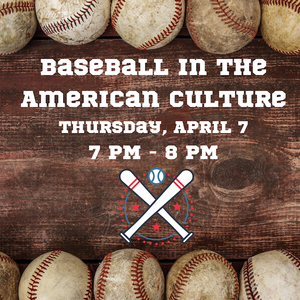 Baseball first popped up in American culture in the mid-19th century but it was not until the mid-1880's that baseball achieved a level of prominence away from the field. Baseball has been the subject of books, vaudeville, Broadway, and of songs, movies and television. Baseball cards played a role in kids growing up and Yogi Berra became an American icon.

Please register for this informative and enjoyable look at America’s favorite pastime.

Presenter, Evan Weiner. Evan was a contributing columnist for New York Newsday; AM-New York, the New York Press, and the Bergen Record, to name a few. Internationally he has appeared on the BBC Radio network. He has written eight books about the business and politics of sports.