Commemorating Signing of the Constitution 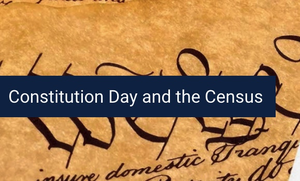 From the very beginning, Alexander Hamilton and Thomas Jefferson disagreed.

In the popular Broadway musical Hamilton, the titular character Hamilton sings about his ongoing feuds with the then-secretary of state, Jefferson: “We have fought on like 75 different fronts.”

“It is fitting for the Census Bureau to celebrate Constitution Day with the people of Philadelphia as we look toward the 2020 Census next spring.”

And they did — on everything from creating a national bank to, yes, about how to conduct the first census.

The U.S. Constitution mandated a population count of every person who lived in the new nation. But Hamilton and Jefferson disagreed about how to use the census count to grant state political representation in Congress.

President George Washington broke the stalemate and used the presidential veto for the very first time. He eventually approved a variation of Jefferson’s apportionment method.

Tuesday, people will gather on Independence Mall in Philadelphia to observe the day the Constitution was signed in this city on Sept. 17, 1787.

In Philadelphia and in cities across the country, residents will celebrate Constitution Day with cake-cuttings in museums, educational programs, and historical skits featuring “Hamilton,” “Jefferson,” and “James Madison,” who advocated adding more questions to the census in the future.

Constitution Day also is a reminder of how the census reflects the nation’s past and shapes the future.

“It is fitting for the Census Bureau to celebrate Constitution Day with the people of Philadelphia as we look toward the 2020 Census next spring,” said U.S. Census Bureau Director Steven Dillingham. “The census is not only a head count of our nation, but it is a history of the people of this country since our founding.”