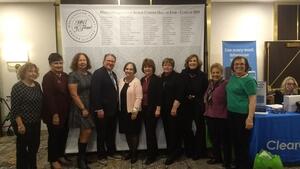 Westchester County Executive George Latimer will join in honoring the achievements of 49 senior citizens from throughout the County at the 38th Annual Senior Citizens Hall of Fame Awards on Friday, December 4 at 11:30 a.m.  This year’s program names Deborah Moorehead of Yonkers and William S. Greenawalt of Hartsdale with top honors. The video of the full event will be available to view at http://westchesterpartnership.org/38th-annual-senior-hall-of-fame/.

Latimer said: “It is my honor to commend this active group of Westchester County residents, and induct them into our Senior Citizens Hall of Fame for their dedication and commitment to our communities. This longstanding tradition is a simple way for us to say thank you, and recognize top honorees like Ms. Moorehead and Mr. Greenawalt for their time, energy and promise to enhancing the quality of life of those around them.”

DSPS Commissioner Mae Carpenter said the achievements of the Hall of Fame honorees show the importance of people giving back to their communities and to each other. Carpenter said: “The honorees show that age is never a deterrent to being a vital member of our society. In fact, it’s an advantage because of the life experiences they bring with them. Their generous contributions have helped to make Westchester County one of the most senior-friendly places in the world.”

The Senior Hall of Fame began in as part the 300th Anniversary of Westchester County’s founding. Its purpose was to showcase how seniors have contributed to building the County. Almost 1,200 seniors have been inducted since.

For sponsorships and more information, contact Rose Cappa at  This email address is being protected from spambots. You need JavaScript enabled to view it.  or (914) 747-0519.

To be nominated, seniors must have made significant and enduring contributions to enhance Westchester’s quality of life through their professional work, volunteer achievements or both. Nominations are made by members of the community, and the honorees are selected by a panel of judges. The names of past honorees are engraved on plaques that are permanently displayed at the DSPS office in Mount Vernon.

Deborah Moorehead was born and raised in the Bronx, NY. She graduated high school and then attended Monroe College where she studied Computer Science. Ms. Moorehead worked for over sixteen years for New York Foundling/St. Agatha Home for children, starting out as a childcare worker and working her way up to a supervisory position. Ms. Moorehead raised two children and is now raising her grandson, Justus, who is thirteen. Her other grandchildren frequently stay with her as well. Ms. Moorehead has advocated on behalf of Kinship parents, many of whom are Seniors, by raising awareness amongst both elected and appointed officials of the many challenges they face and helping to effect change.   She also advocates for programming for Seniors with the Yonkers Department of Parks and Recreation.  In addition, Ms. Moorehead has met with elected officials to focus attention on the particular challenges senior citizens raising children face with locating affordable housing, both because of the method of communication (the internet) and because of the unavailability of senior housing to those raising children.  Her continuous efforts raise visibility on this issue which is often overlooked.

William Greenawalt was born in Brooklyn and his  family moved to Hartsdale in 1937. He attended Cornell University and later Yale Law School.  He was part of the United States Navy as well.  He is married to  Peggy T. Greenawalt and together they have 2 sons and 4 grandchildren.  Mr. Greenawalt has been a progressive leader on the Democratic State Committee, and with its Reform Caucus and Progressive Caucus, and he has sponsored election reform in NYS, and he fought for and insured transparency as Acting Treasurer.  He was part of Legal Services of the Hudson Valley Board of Directors, Westchester White-Tailed Deer Impact and Forest Regeneration Citizens’ Task Force 2006-2008; on the Board of Theodore D. Young Community Center, Greenburgh; Scarsdale Congregational Church (“SCC”) Moderator 1988-90, Trustee, Choir Member, occasional soloist; 1963 March on Washington for Jobs and Freedom; and often does Pro Bono legal work for clients unable to pay.

Melvin "Mel" Berger, originally from the Bronx, first moved to Mount Kisco in 1984 when he purchased a pharmacy there.  Within two short years, Mel saw firsthand the impacts of addiction in his community, particularly through individuals attempting to fill fake prescriptions. He worked with the local police, and struck up a conversation with a local judge about his concern for these people, and thus began Mel's tireless volunteer work.  These programs have improved the quality of life for individuals in Mount Kisco and beyond, and include treatment programs for those in the Hispanic community, anti-addiction education and support programs for local teenagers, drug take back days, and a critical emergency shelter partnership program which runs in local churches through the cold months of the year in Mount Kisco and in the surrounding communities.  Even through the pandemic, Mel's tireless dedication to the shelter program continues to amaze. He has received many local and county level awards.

Mavis has served as President of Friends of the Old Croton Aqueduct (FOCA) since 2000. She was instrumental in leading their Keeper’s House Restoration. Mavis has organized exhibits and workshops, with a docent program to provide historic information to visitors from Westchester County and beyond. She has also led many Aqueduct trail clean-ups and vine-cutting events, including partnering with the City of Yonkers, Groundwork Hudson Valley, and Green Task Force -- all to support the long-term goal of improving the overall ecology of this very special NYS park -- for which FOCA was honored with the Going Green Spirit Award by the Volunteer Center of United Way (2013). Mavis is the liaison between NYS Parks, the FOCA volunteer Board, and the community. She leads the Board meetings, Annual Meetings, local engagement, and supervises all FOCA business, events, and development efforts. Mavis and her husband moved to Southlawn Avenue in Dobbs Ferry in 1958, and raised a family of four -- three biological children and a sibling from Ghana whom they welcomed at age 10. She worked as a Creative Director at the advertising and marketing agency Lintas for many years, writing commercials for Johnson & Johnson, Unilever, and other companies, and overseeing commercial production

For several decades Eunice Kaplan created and managed the Beth El Synagogue Talking Tapes Braille program for the visually impaired. Eunice spearheaded this lengthy and complicated project, 5 days a week, and was responsible for managing over 70 volunteers who read and taped 700+ books and publications for the Jewish Braille Institute. As Eunice values reading, she worked for decades to enable children, adults and seniors to enjoy this pursuit. She continues to remain active in her senior community by reaching out to those who are socially isolated during the Covid-19 pandemic. She finds enjoyment in helping other people, whether she is working with children as a volunteer reader in the local public school or driving fellow seniors to Beth El for educational and social programming. Over her many decades of community involvement, she has had a great impact on the quality of the lives of the people she serves.  Eunice grew up in a large family in Flatbush, Brooklyn. She graduated from NYU with a degree in business management. She has been a longtime professional volunteer who works tirelessly with different generations to improve the quality of their daily lives. Eunice and her husband have three children, six grandchildren and two great grandsons.

Dinbandhu Shah has been very involved with the Heritage of India Festival as a Volunteer working as Committee Member, President Elect, President and Co-Chair.  He is an advisor to the past and present Presidents at IACAW.  He has been a Co-organizer of IACAW Senior Citizens Monthly Program for last 12 years. These programs celebrates senior citizens birthdays, provides educational workshops, music, games, entertainment and an opportunity for Indian American senior citizens to come together and socialize and share similar cultural experiences so as to alleviate loneliness. Mr. Shah has organized musical concerts for Westchester Music of India Group to raise funds to help other organizations that provide help to victims of domestic violence and arranged various seminars on senior health and speaking on different topics like Diabetes, and hypertension.  He has organized Senior Meetings and programs every last Sunday of the Month for last 12 years, and continues to do them using Zoom.