County Department of Correction holds dedication ceremony honoring 63 employees who passed away while in service. 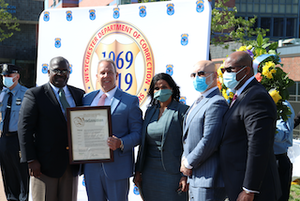 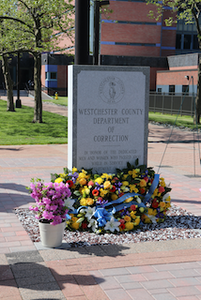 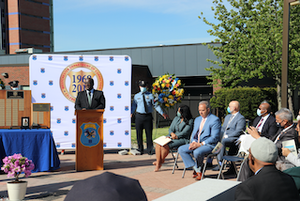 On May 7, as part of National Correctional Professionals Week, the Westchester County Department of Correction (WCDOC) held a dedication ceremony honoring 63 employees who passed away while in service with the Department during its 52 year history. In 1984, President Ronald Reagan signed a proclamation to annually recognize correction professionals for the work they do in jails, prisons and community corrections across the country. This year, to commemorate National Correctional Professionals Week, WCDOC will be dedicating a monument and memorial bench at their main jail plaza, to serve as a constant reminder of the significant contributions made by those employees who died while in service to the County.

Commissioner Joseph K. Spano said: “Dedicating the monument and memorial bench is part of a collaborative effort to honor the contributions that our faithful colleagues made to advance WCDOC during their careers and to reassure family members that their loved ones remain in our thoughts and prayers. I’ve had the pleasure of working alongside most of these men and women and remember firsthand how their passing impacted ever level of our workforce. With County Executive Latimer’s support and in conjunction with our partners we now have a permanent reminder of their great friendships and everlasting memories.”

The 63 dedicated men and women who passed while in county services at WCDOC are comprised of 48 Correction Officers, 7 Captains, 7 Sergeants and 1 Commissioner.

Westchester County Executive George Latimer said: “This memorial bench represents the boldest of our County workers, who made the ultimate sacrifice while protecting our local communities. Their memory will be a reminder for all who follow in their footsteps, who provide safe and secure custody and rehabilitation services for those sentenced at the County jail, women’s unit and penitentiary.”

President of the Correction Officers Union said Neil Pellone said: “This dedication fulfills a commitment and vison started by the founder of our annual memorial ride, former Correction Officer Scott Delfa. It’s also an opportunity for all members of our association to show recognition and appreciation for those correction officers who were not fortunate enough to reach the retirement phase of their lives.”

President of the Supervisors Pete Dichiara said: “This dedication stirs up a lot of emotion and reminds me of the great times I enjoyed with my former brother and sister supervisors over the years. It also reminds us of how delicate life is and how complex working in a correctional environment can be.”

The ceremony featured the Departments Ceremonial Honor Guard, the Westchester Police Emerald Society’s Pipes and Drums and both current and former DOC employees. The ceremony concluded with a benediction from the Departments longtime Imam, John Nashid, who will be retiring at the end of May after 34 years of dedicated service.