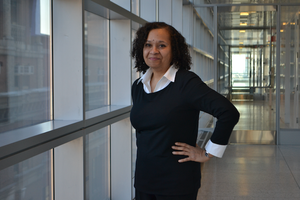 (White Plains, NY) – Westchester County Executive George Latimer is pleased to announce that the County has hired Lydia de Castro to lead the Forensics Division at the Department of Labs & Research.

Latimer said: “Lydia brings a wealth of experience to our Labs & Research team. Her expertise in the field, and extensive knowledge and involvement interacting with other pertinent agencies, will lead to greater communication and cooperation in an area where the need for those attributes is paramount.”

de Castro, a veteran of the field, previously served as a forensic scientist at the New York City Office of Chief Medical Examiner (OCME). There, de Castro managed the work of scientists who analyze DNA from evidence in criminal cases in New York City including homicides, sexual assaults, weapons possession, and property crimes. Her purview also included policy decisions for the laboratory, and serving as a liaison for laboratory clients including medical examiners, other scientists, police and District Attorney's offices.

de Castro said: “I spent many fulfilling years as a forensic scientist at NYC’s OCME.  I saw this job opening as an unanticipated but exciting opportunity to continue to learn and grow in this field, and to share what I know with a dedicated group of forensic professionals here in Westchester County.

In her new role, de Castro will be charged with directing overall operations, so that the division provides “accurate, reliable, timely, and state of the art scientific analyses” as described in the division’s mission.

de Castro began her career as an intern in 1990 and served in the forensic toxicology laboratory at OCME prior to joining the forensic biology laboratory in 1996. In addition to her work in the lab, de Castro has also worked as an expert in her field by providing training to numerous organizations and individuals, including sexual assault forensic examiner trainees and victim advocates at public and private hospitals in New York City. She was recognized with the Lydia Martinez Collaboration Award from the New York City Alliance Against Sexual Assault.

de Castro holds both a Bachelor of Science and a Master of Science degree in forensic science from the John Jay College of Criminal Justice, CUNY.