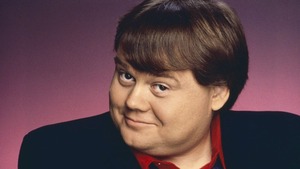 Louie Anderson, who rose to fame as a stand-up comic, then used the spirit of his late mother to win an Emmy as Christin on the FX series Baskets, has died. He was 68.

Anderson died Friday morning in a Las Vegas hospital of complications from cancer, his longtime publicist Glenn Schwartz told The Hollywood Reporter. Anderson had been undergoing treatment after being diagnosed with a type of non-Hodgkin lymphoma.

Mentored by legendary stand-up Henny Youngman, the gap-toothed Minnesota native was named one of “100 Greatest Stand-Ups of All Time” by Comedy Central in 2004. He also co-created Life With Louie, the Saturday morning animated series in which he played a version of his 8-year-old self, and hosted a revival of the game show Family Feud.

Louie Perry Anderson was born on March 24, 1953, in St. Paul, Minnesota. The second-youngest of 11 children, he grew up poor in the Roosevelt Homes housing project. He blamed his father, Louis, an abusive failed musician who battled alcoholism, for the family’s woes and praised his mother for filling the household with love and hope.

Anderson won two Daytime Emmy Awards for his voice work in "Life With Louie," on which he voiced his younger self as well as his father. The series which ran from 1995 to 1998. He then hosted the "Family Feud" game show from 1999 to 2002.

Anderson died in a Las Vegas hospital of complications from cancer, his publicist confirmed.

The type of cancer Anderson had been diagnosed with is the most common type of non-Hodgkin lymphoma in the world. While it's an aggressive form of cancer, it is considered potentially curable.