May Reads in Review 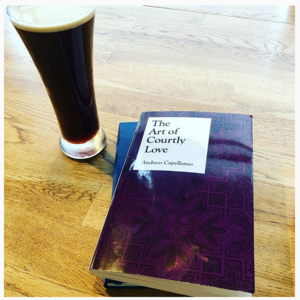 Overall, May was one of my favorite reading months so far this year. It’s the month I discovered three fantasy series I’m looking forward to continuing, and I discovered an excellent new-to-me translation of The Odyssey.

One interesting trend I’ve noticed is that I’m reading longer books. In April, I read the same number of books as I did this month (10), but I read approximately 1,000 fewer pages. In March, I read nine books but almost half the the number of pages. In February, I read 14 books but (as in April) 1,000+ fewer pages. And in January, I read 16 books but only about 500 more pages. Obviously the quality of my experience far outweighs in important page counts and number of books read. But I find the trend interesting because I so enjoyed the books I read in May. I want to remind myself not to shy away from longer books.

And now for the usual stats and recaps...

The Fifth Season (The Broken Earth #1) by N. K. Jemisin

How much did I love this novel? I’m already on the third book in the series. Set in a world beset by geological catastrophes, this first book in the series follows three points of view that gradually converge. What hooked me are the flawless world building, perfect pacing, unique narrative voices, and elegant prose. So basically everything. And the series has only gotten better with each book.

Every Heart a Doorway (Wayward Children #1) by Seanan McGuire

This novel kicks off with a neat premise: a home for children who have returned from fantasy worlds. Think Alice coming back from Wonderland and not knowing how to cope with what she’s been through. So, yeah, the premise was cool...

The City of Brass and The Kingdom of Copper (The Daevabad Trilogy #1 and 2) by S. A. Chakraborty

I would already have finished this trilogy, but the third book has not yet been released. The series is set primarily in Daevabad, a Middle Eastern kingdom in which various factions vie for power. Those who seek it can be as merciless as those who hold it. The first quarter of City of Brass struggles a bit to set up the world, but once it gets going, the narrative is absorbing and thought-provoking. Chakraborty excels at seeing a problem from multiple perspectives and showing how conflict can result from irreconcilability, fear, old wounds that have festered—rather than being a matter of good vs. evil.

The Art of Courtly Love by Andreas Capellanus, translated by John Jay Parry

The translated title of this book, originally written in Latin in the late 12th century, is a bit misleading. Andreas’ title was De Amora, which is more like “About Love” or “Concerning Love.” The book itself is a bit of a puzzle.

It begins with Andreas addressing a fellow called Walter, who has asked him for advice on love. Andreas agrees to provide it, though he cautions that he does not believe love is a useful pursuit for a wise man. After intricately detailed advice concerning how to pursue and sustain love, Andreas repudiates love and expounds on the wickedness of women. Oh yes, this is a feminist delight. It provides so very much to rend one’s garments over. Only I’m not convinced Andreas was being serious. There’s just so much parody that can be read into this. If you’ve read it, do let me know what you think.

I’d never read or watched this series—which I won’t bother to recap because really—and didn’t plan to. But then my nephew told me to read it. When my nephew tells me to read a book, I read it. I enjoyed this much more than I thought I would. It’s character- and place-driven and filled with pathos. I look forward to continuing the series.

The Real Life of the Parthenon by Patricia Vigderman

This slim volume revolves around the question, to whom do antiquities belong? To explore the question, the author visits ancient sites, interviews various interested parties, and reads theory. I found it at times lyrical, at times excruciatingly labored. If you like travelogues with a dash of navel-gazing and high-brow theory, you might enjoy this one.

Iphigenia Among the Taurians and Heracles by Euripides, translated by John Davie

Only 18 of Euripides’ plays have survived, and I’ve yet to get through them all. I added these two in May. Though both are referred to as tragedies, they’re quite different in tone.

Iphigenia Among the Taurians works off the premise that Iphigenia was not scarified by Agamemnon after all. Artemis spirited her away to be a priestess in her temple at Tauris. There, she prepares humans for sacrifice. Her brother Orestes ends up in Tauris after murdering their mother, which he did to avenge her murder of their father, which she did to avenge his sacrifice of Iphigenia. Who isn’t dead after all. Oh, the tangled webs the Greek tragedians wove. Ha?

Heracles is properly tragic. Euripides plays on the traditional telling of the myth that Heracles, in a fit of Hera-induced madness, murdered his wife and sons. The myth is already devastating, but Euripides manages to make the story even more soul-crushing. But please don’t let that put you off reading this play. It’s devastating but beautiful in the way it explores how a man broken by his own tragic acts can find the will to go on. And it’s fun to see the way Euripides sneaks in a pro-Athens thread—it was performed in 416 BC, during the Peloponnesian War between Athens and Sparta.

The Odyssey by Homer, translated by Allen Mandelbaum

This was my audiobook in May, and I loved it. Mandelbaum’s translation is beautiful and accessible. The narrator brought the different characters to life with his inflections. Now I want to read this translation with my eyes and take in its loveliness all over again.

What were your favorite and notable May reads? Any recommendations?

Are you a book lover - check out HamletHub's Books Ink Site.