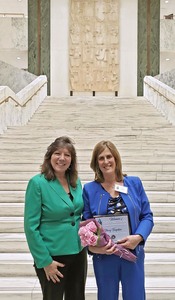 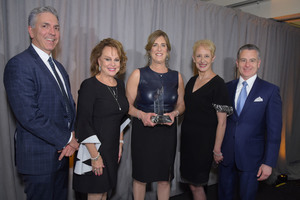 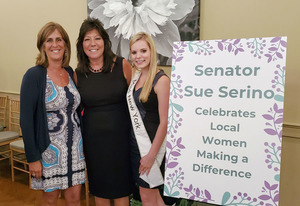 Stacey Tompkins, president and owner of Tompkins Excavating, recently received a 2019 Woman of Distinction recognition from New York State Senator for the 41st senate district Sue Serino along with induction into the Business Council of Westchester Hall of Fame under the Women in Business Success category.

“These accomplishments are among the most gratifying achievements that Tompkins Excavating has earned so far,” said Stacey, company president and owner. “We have worked hard over the years to become a leader in our field, operate in an ethical manner and give back to the community,”

Tompkins traveled to Albany to attend the State Senate’s annual Women of Distinction event with Senator Serino. The awards, which celebrate women who help improve the quality of life for New Yorkers, recognize one honoree from each State Senate District.

“Stacey is a true trailblazer whose work and leadership has been effectively shaping communities here in our local area and well beyond for years,” said Senator Serino. “Stacey has worked to successfully turn her small family lawn mowing business into the thriving enterprise that it is today, empowering those around her along the way. Her emphasis on teamwork in her own business has led to extensive community involvement.”

Senator Serino also recently held a separate district-wide networking event, Connecting Women in Our Community, which featured three speakers, including Tompkins. The event celebrated “trailblazing women who have paved their own way in their professional industries and have taken unique paths to get involved in our communities,” said Senator Serino, the first woman elected as senator in her district.

Other speakers included Kadiyah Lodge, a business service manager in the non-profit sector who connects businesses and job seekers through on-the-job training opportunities, and Rita Powers a casting director for film, television and other outlets.

Tompkins also attended the Westchester Business Council’s Hall of Fame ceremony, held at Glen Island Harbour Club in New Rochelle, New York. Her name will be added to a plaque that hangs in the main terminal at Westchester County Airport.

Along with other inductees, who exhibit “visionary leadership,” Tompkins exemplifies “the transformational ability to actualize their companies’ goals,” said Marsha Gordon, Business Council of Westchester president and CEO. “In other words, they inspired strategic change and evolved to meet the emerging trends of their industries.”

Established in 1986, Tompkins Excavating began as a lawn mowing service and has since expanded into a full-service commercial and residential excavation company.

Stacey joined the family firm in 1991 and took over as president and owner in 2013, overseeing almost every aspect of the business and tripling revenues. Her strong management background has helped cultivate an organizational culture that retains top-quality employees.

In the last two years, the company has worked on several major projects, including the Peekskill Shopping Center, the City of Peekskill firehouse, BJ’s Wholesale Club gas station in Yorktown Heights, CareMount medical facility in Yorktown, a pool addition at Lifetime Fitness in Harrison and a nine-acre food warehouse in Orange County for Mondelez International, Inc.

A leader in the community, Tompkins Excavating is involved with many charitable endeavors, including Support Connection, Habitat for Humanity, Putnam County School District, Jan Peek House, Community Cares of Mahopac and the Community Center of Northern Westchester.

In addition to Stacey, her husband, Mark Tompkins, and their three sons carry on the family tradition. Mark serves as operations manager and their sons, Kevin (a recent civil engineering graduate from Northeastern University), Justin (who studies business at the University of Connecticut) and Michael (a high school student) are actively involved in the future direction of the company.