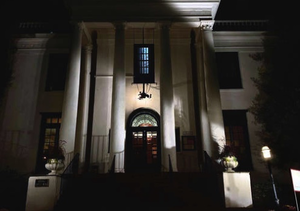 If you ever wanted to have dinner with a ghost, this is the time of year to head to Tarrytown NY. Just up the hill from the former home of Washington Irving, author of The Legend of Sleepy Hollow, looms another haunted manse: King Mansion, now the home of restaurant Goosefeather.

Located on the grounds of the Tarrytown House Estate, the house is named after railroad executive Thomas M. King. But it’s his daughter-in-law, Sybil, who is rumored to roam its halls. Venture up the Hudson Valley for Dale Talde’s modern, seasonal Chinese cuisine and you just might catch a flash of Sybil’s white gown in a second-story window. Goosefeather has just been named one of the "17 of the Creepiest Haunted Bars and Restaurants in America" by Thrillist.com