Holiday Show at the WBT: It Happened One Christmas Eve 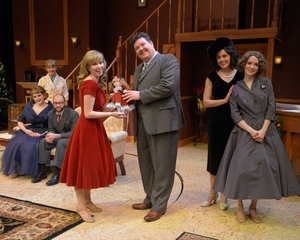 It Happened One Christmas Eve is the heart-warming story, about an infant left on the doorstep of an old brownstone rooming-house in Brooklyn on Christmas Eve, and the magic she brings to the lives of those who find her.

Richard Stafford, the Director said; “It happened One Christmas Eve” is the heartwarming story of a boarding house family—There are many kinds of families and sometimes we create our own based on trust, love and hope. Our characters had faith and they trusted in each other. They believed in charity, not the showy kind, but the quite kind that brings comfort to the soul. Isn't that what the spirit of Christmas is all about?”

There are plenty of story lines among a house full of interesting characters; an Irish cook, an English spinster, a Brooklyn showgirl who dreams of stardom, a proud Boston poetess and two Romanian brothers. Their lives are changed forever one Christmas Eve when a baby is placed on their Brooklyn doorstep. That baby, they name her Dolly, grows in their love, a child of charity.

There are also plenty of songs, some familiar, some penned just for this show: From “Silent Night” and “Holly Jolly Christmas” to a bouncy “We Haven’t Got Time for Christmas” that opens the show and a heartfelt “I’m All Alone in the World.”

Bob Fitzsimmons, a gifted actor, director and playwright, ran publicity for Westchester Broadway Theatre in its early days and shepherded successful children’s plays there. The graduate of Archbishop Stepinac High School directed school and community theatre shows across Westchester until his untimely death, at 37, in 1992. Each year, WBT gives a scholarship in his name to a Stepinac graduate who has excelled in theatre.

The production is Directed and choreographed by Richard Stafford, who has been at the helm for several WBT productions including; An American In Paris and Anything Goes.  Musical Director is Bob Bray. Set Design is by Steven Loftus, Lighting Design is by Andrew Gmoser, Sound Design is by Mark Zuckerman, Costume Design is by Keith Nielsen. Wig design by Gerard Kelly The Production Stage Manager is Victor Lukas. ASM is Aubrey Sinn. Properties are by Grumpy Props. As with all our productions, Lisa Tiso is the Associate Producer.