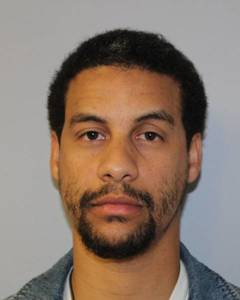 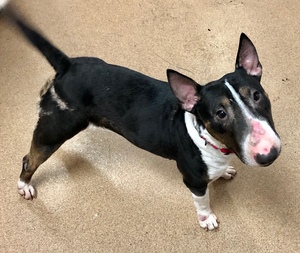 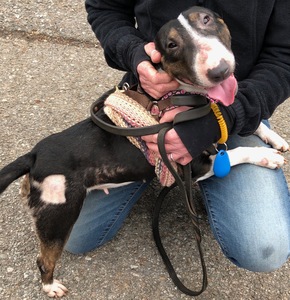 On December 5th, 2019, The SPCA of Westchester’s Humane Law Enforcement Unit (HLE), under the direction of Ernest Lungaro and in a joint investigation with the Pound Ridge Police Department, announced that Paul Paulino, 32, of 256 Westchester Avenue in Pound Ridge has been arrested and charged with felony aggravated animal cruelty.

On November 14, 2019, Pound Ridge Chief of Police David Ryan requested the assistance of the SPCA’s HLE Unit after allegations were made that Lady, a four-year-old mini bull terrier, was suffering from a lifetime of abuse. The allegations include Lady being choked and lifted off the ground with a metal collar, having her nose rubbed into the concrete and being punched, kicked and struck with a leash.

The SPCA’s HLE Unit took possession of Lady and brought her to the SPCA of Westchester for immediate medical treatment. A full body scan was performed and revealed that Lady is suffering from a broken vertebrae in her neck. After a thorough examination by the SPCA’s Veterinarian it was determined that the callus and thickening of the skin on her nose is consistent with it being rubbed on concrete. Marks on her body are further consistent with her being struck with a leash.

“It’s unimaginable that someone could do such a thing to a defenseless animal,” said Shannon Laukhuf, SPCA Executive Director. “Lady is such a sweet, happy dog even after all she’s been through. We look forward to finding her the loving home that she deserves.”

If you suspect animal cruelty or neglect, call the Police or the SPCA of Westchester’s Confidential Animal Cruelty Hotline at 914-941-7797.