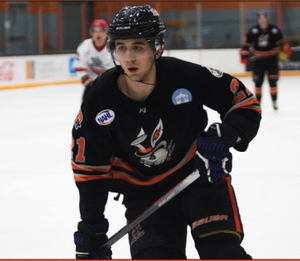 The NAHL Danbury Hat Tricks wrap up a midweek matinee series on Thursday when they take on the New Jersey Titans.

In yesterday’s contest, Josh Seeley posed as a brick wall in the net stopping 52 of 56 shots for a .929 save percentage. It’s been a strong stretch for Seeley as he’s now stopped 163 of 177 shots over his last four games for a .921 save percentage.

“We need to put together sixty, consecutive, solid minutes of hockey,” said Hat Tricks head coach Billy McCreary. “We need to be better at limiting chances and turning that defense into offense.”

The Danbury Jr. Hat Tricks are back in action today, for the second leg of a back-to-back afternoon game here at the Danbury Arena against the New Jersey Titans. After this afternoon’s contest the Hat Tricks will travel to Johnstown to battle the Tomahawks for their second series this season.

You can get tickets to tomorrow’s matinee contest online or at the front desk here at Danbury Arena. If you can’t make it out to the game make sure to follow along on the Hat Tricks' various social media channels or online via HockeyTV.