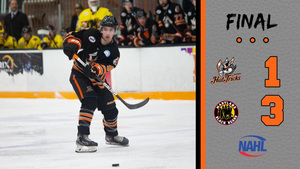 The Danbury Hat Tricks wrapped up the first half of their NAHL season on Saturday evening and played a solid 60, but ultimately lost 3-1.

One of the bright spots from Saturday was the play of Ryan Johnson in his NAHL debut. Johnson, who is the brother of Hat Tricks netminder Adam Johnson came to Danbury from the Sioux Falls Power U18 AAA and has made an immediate impact.

“It’s cool to see them (Adam and Ryan Johnson) get to play in a game together,” said Hat Tricks Assistant Coach Matt Voity. “Not many siblings get to play together at this high of a level of hockey.”

In his first game with Danbury, Johnson tallied his first career goal on the power play. Michael Salandra dropped the puck to Joshua Burke at the point before dishing it to Johnson, who corralled it and wired it over Michael Morelli’s blocker in the second period.

The goal invigorated Danbury’s bench as the team fought for a comeback over the remaining 25 minutes of the game. The Hat Tricks peppered Morelli with 26 shots in the second and third period but were only able to find the back of the net on Johnson’s goal.

Adam Johnson got the start in net for Danbury and surrendered three goals in the first half of the contest. After those goals Johnson had a solid game in net, stopping more than 20 shots over the final period and a half.

“It was good to see him compete,” commented Hat Tricks goaltending/assistant coach Matt Voity. “It’s good to see him have that level of compete after he had a tough start to the game tonight.”

Danbury gets a couple of weeks off before its next game when it heads to Maine to face the Nordiques on Dec. 31.