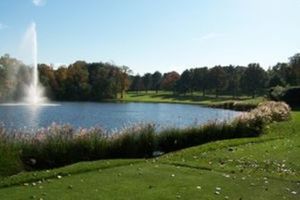 A Maple Moor Golf Course pond has been given a facelift that will help filter out pollutants commonly found in storm water runoff, and provide a natural habitat for birds and amphibians living alongside the pond, Westchester County Executive George Latimer said.

Thanks to state funds received by the Westchester County Soil and Water Conservation District, the district purchased nearly $8,000 in plants and seed to create a buffer next to a freshwater pond on the County-owned golf course. More than a dozen trees and 600 irises in gallon-sized containers were then planted by staff of the Department of Parks, Recreation and Conservation.

Latimer said: “This effort will not only beautify this pond, it also will help improve water quality in both the pond and downstream Mamaroneck River and Long Island Sound. The project was made possible by a collaborative effort among our departments and staff members that stretched the value and effectiveness of state funding received by the County’s conservation district.”

The funding was provided through the New York State Department of Agriculture and Markets Soil and Water Conservation Committee’s “conservation projects” funding program to districts across the state. The Westchester district’s proposed pond planting project was awarded state funding in the fall, and plants were purchased from Hardscrabble Farms Nursery in North Salem this spring.

The district encourages so-called aquatic buffers next to streams, ponds and other shorelines due to their environmental benefits. The plants stabilize soil and embankments and cleanse storm water runoff due to their biological and chemical filtering capabilities.

In addition to the irises, the Parks Department also planted 13 trees, including serviceberry, tupelo, pin oak and bald cypress, alongside the pond. Red fescue grass seed will be sowed next to the pond to enhance the buffer’s benefits.