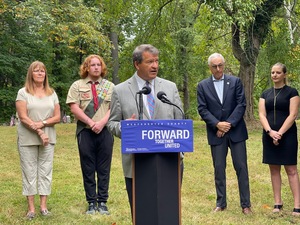 Watch Video of the new signage at the African American Cemetery: https://www.youtube.com/watch?v=8LtZvk4XA_k

In a moving ceremony, Westchester County Executive George Latimer dedicated signs at Rye’s African-American Cemetery, located inside the Greenwood Union Cemetery, alongside members of the African American Advisory Board and Eagle Scout, Jack Lawler and his family.

Rye’s African American Cemetery was officially established in 1860 although it had most likely been used as a burial ground for African Americans long before then. There are an estimated 300 people buried at the cemetery, which include veterans from the Civil War, Spanish American War, World War I and II as well as Samuel Bell, a soldier in the 54th Massachusetts Volunteer Infantry, one of the first black military units of the Union Army during the Civil War.

Westchester County Executive George Latimer said: “There are so many aspects that contribute to the diversity of Westchester County and Rye’s African-American Cemetery’s staggering history is a huge part of it. It is an honor and a privilege to unveil these new signs to pay homage to those buried here.”

In addition to the new signs, local Eagle Scout Jack Lawler and his troop recently completed a beautification project at the site, which includes a planter adjacent to the sign in addition to planting around the perimeter and a bench.