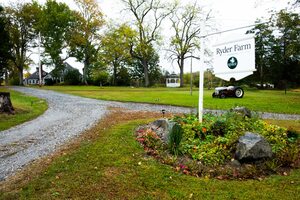 In an effort to encourage voter registration in the midst of social distancing and safety concerns, SPACE on Ryder Farm, a nonprofit residency program and organic farm located on a 225-year-old family homestead in Putnam County, New York, is hosting a drive-up voter registration drive for local residents in both New York and Connecticut. Participants will be able to stay in their car as they work with SPACE team members and volunteers to register to vote, request absentee ballots, locate local polling stations and ask any other questions they may have about the 2020 election process.

“We hope to interact with as many local community members as we can, knowing that many of them may already be registered, but could still have questions about polling site locations or how to request an absentee ballot in their county. The information online can be confusing and difficult to locate, and we want to offer a helping hand in navigating the red tape,” says SPACE CSA Fellow and Voter Registration Drive coordinator, Emily Blanquera. During the registration drive, the SPACE team will be on hand with flyers, forms and QR codes to guide participants in registration and requesting absentee ballots for the 2020 election. Additionally, SPACE will have stamps and envelopes for local citizens to mail in their forms. These materials will also be available after the registration drive at SPACE’s roadside farmstand for the community to use for all their election based needs.

The drive will take place Tuesday, September 22nd from 4pm to 7pm, Wednesday, September 23rd from 4pm to 7pm and Saturday September 26th from 9am to 12pm. Friendly, masked SPACE team members will greet future voters from a safe distance and work with them from the comfort of their cars. On Tuesday, September 22nd, SPACE’s Voter Registration table will be located directly next to our roadside farmstand on Starr Ridge Road. There are parking spaces available directly in front of the farmstand, and additional parking on the property can be found up the driveway to the left of the historic gray house. On Wednesday, September  23rd and Saturday, September 26th, SPACE’s Voter Registration table will be located all the way up the driveway of 406 Starr Ridge Road, past the gray house on the right.

Those who are eligible and want to register to vote must come prepared with their full name, home address and driver’s license number or the last four digits of their social security number. The SPACE team is prepared to assist both New York and Connecticut residents. Don’t wait!

Below are important dates for both New York and Connecticut.

Questions about SPACE’s Voter Registration Drive? Contact Emily Blanquera at This email address is being protected from spambots. You need JavaScript enabled to view it. .

Located on Starr Ridge Road in Brewster, New York, Ryder Farm was first established by Eleazer Ryder in 1795, was an early adopter in the organic movement and was one of the founding farms to participate in the Union Square Greenmarket in New York City. In 2019, SPACE assumed management of the agricultural operations, and is deeply committed to ensuring Ryder Farm is a source of inspiration and nourishment for all. In addition to stocking SPACE’s residency kitchen, produce from Ryder Farm is available at SPACE’s roadside stand on Starr Ridge Road in Brewster and via its sliding-scale CSA (Community-Supported Art + Agriculture) Membership.