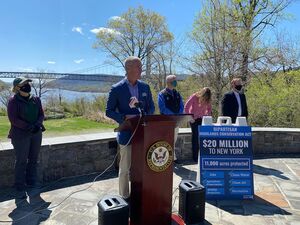 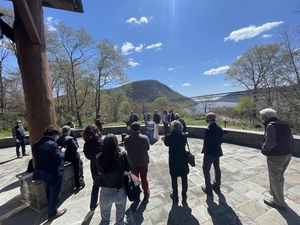 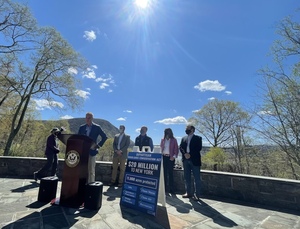 “We are stewards of the Hudson Valley’s environment, and it’s our job to preserve New York’s great outdoors for our kids and grandkids to enjoy for generations to come,” said Rep. Maloney. “Reauthorizing and improving the Highlands Conservation Act is key to ensuring our state has the ability to protect our environment and our drinking water while creating jobs by promoting tourism and recreational attractions right here in the Hudson Valley. At a time when our tourism economy is struggling to recover from COVID-19, this reauthorization cannot happen soon enough. I am proud to be leading this fight in Congress, and I look forward to getting this bill on President Biden’s desk.”

“The Highlands are one of our most special national environmental resources, and we must continue to protect the beauty of the region for generations to come,” said Sen. Gillibrand. “Reauthorizing the Highlands Conservation Act will ensure our communities have the resources they need to preserve local forests, waterways, and open spaces, while promoting the tourism and recreational activities that are so important to economic growth. Especially at a time when communities are struggling, ensuring that these federal resources are available to help sustain tourism economies is crucial. This legislation will continue successful public-private partnerships in the four-state Highlands region and strengthen the local economy.”

“Our beautiful Highlands Region is essential to the well-being and prosperity of the Hudson Valley, which is why we must do everything we can to protect it,” said Ned Sullivan, President of Scenic Hudson. “From his work banning oil barge anchorages on the Hudson River, to his commitment to preserving the Highlands Region for future generations, Scenic Hudson is grateful to have an ally in Washington like Congressman Maloney.”

“We are grateful to Congressman Maloney for his continued commitment to preserving the Highlands Region through his work on the Highlands Conservation Act,” said Michelle D. Smith, Executive Director of Hudson Highlands Land Trust. “This legislation will provide critical funding to ensure that people across the Hudson Valley can have clean water and clean air, and it will help preserve our vibrant natural resources for future generations to enjoy.”

“The Highlands Conservation Act has had an enormous impact on efforts to conserve the Highlands Region, bringing tens of millions of dollars in Land and Water Conservation Fund dollars to the region to protect its most important outdoor places,”said Mark Zakutansky, Director of Conservation Policy Engagement at Appalachian Mountain Club. “The Appalachian Mountain Club is thankful to have Congressman Maloney leading the charge to reauthorize the Highlands program to help protect tens of thousands of additional acres of open space in the coming decade.”

The Highlands Conservation Act, a bipartisan land conservation program funded through the Federal Land and Water Conservation Fund (LWCF), protects critical conservation areas in the Mid-Atlantic Highlands of Pennsylvania, New Jersey, New York, and Connecticut. The Highlands is a nationally significant landscape that yields benefits and resources to more than 11 million Americans.

A boon to our agriculture and tourism economy, the bill authorizes the U.S. Fish and Wildlife Service  (FWS) and the U.S. Forest Service to work together to help the Highland states, local governments, non-profits and private forest and farm landowners to conserve the land and natural resources of the Highlands region, helping to lower costs for local farmers and preserve open spaces.

Since 2007, $70 million in funding has been awarded through the Highlands Conservation Act Grant Program to the four States, including $20 million to New York. The program has helped preserve nearly 11,000 acres in the Highlands region, including over 4,000 in New York alone.