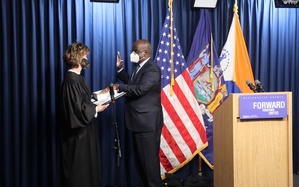 Virtual Inauguration Ceremony held at the Michaelian Office Building can be viewed HERE.

The program was emceed by County Attorney John Nonna and opened with prayers from Reverend Troy DeCohen, Pastor, Mt. Vernon Heights Congregational Church and Rabbi Leora Frankel, Associate Rabbi, Larchmont Temple. The prayers were followed by a virtual Pledge of Allegiance by Boy Scouts Troop 165 Yorktown and a stunning rendition of our National Anthem by County Correction Officer Joetta Crump.

Latimer said: “The first four years of our administration were all about fixing what was broken. We inherited a number of fiscal problems and first and foremost, we needed to get Westchester County back on solid financial ground. But more than that, we created a template that results matter to us. We did not accept that we couldn’t build a new family court in New Rochelle. We did not accept that the historic Elijah J. Miller House was going to collapse. We did not accept that Sprain Ridge Pool would not be open again for children and families to enjoy. We believe in results. We are doing everything we can to improve the lives of Westchester County’s residents, and that is exactly what we plan to do with the second term that is before us.”

Jenkins said: “We accomplished a lot during our first term in office, and we have a lot that we can feel proud of. We are finally starting to see real progress in every aspect across our County, on infrastructure projects, environmental upgrades and key social justice issues. I thank County Executive George Latimer for his leadership throughout the unprecedented COVID-19 pandemic, and know that we will take the four years we have ahead of us to achieve much more success.”

During his tenure as County Executive, Latimer has upheld an impressive record of achievements including three consecutive County property tax cuts and credit rating stabilization. He is also responsible for bringing several long-standing infrastructure projects to fruition, including updates to Playland Park and the North and South County Trailways. Latimer has broken ground on the restoration of Memorial Field in Mount Vernon, and unveiled the County’s 9/11 First Responders Memorial on the 20th Anniversary of the September 11 attacks, dedicated to the heroes who passed away from 9/11 related illnesses.

Latimer also worked with various stakeholders on key social justice reform during his first term, including the Police Reform and Reimagining Task Force, banning Gay Conversion Therapy, signing the Anti-Wage Theft Law and the Wage History Anti-Discrimination Law among others. He worked to electrify the County’s Bee-Line Bus Fleet, and modernize all County facilities for a green future.

Today, Latimer continues to lead Westchester County through the unprecedented COVID-19 pandemic as the County continues to rebound, rebuild and move forward. He will reveal his top priorities for his second term in the coming days and weeks ahead.

Following the administration of the Oaths of the County Executive and Deputy County Executive and the second inaugural address by Latimer, the program concluded with closing prayers by Imam Shaffieq Chace from Westchester Muslim Center and Reverend Timothy Dalton, Senior Pastor, First Baptist Church of White Plains.