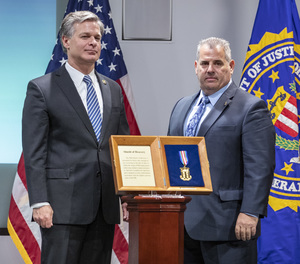 Westchester County Police Detective Terence Malone was recently presented with the FBI's Shield of Bravery for his work on the joint federal-local FBI Westchester County Safe Streets Task Force. The honorary award was presented in Washington D.C. by FBI Director Christopher A. Wray.

The FBI Shield of Bravery recognizes courageous acts occurring in the line of duty or within the scope of FBI employment, including work with a task force or an undercover operation, grave situations or crises associated with the highest priority cases of the FBI

The award citation for Detective Malone reads as follows:

"In late 2017, a violent masked subject committed multiple armed bank robberies and fled the scenes in a stolen vehicle. After locating the vehicle, members of the Westchester County Safe Streets Task Force surveilled the car. When a subject entered the vehicle, team members surrounded it with their cars. As the team members exited their vehicles, the subject rammed the cars and retrieved a gun from the passenger seat. After the subject pointed a gun at officers and refused to surrender, team members neutralized the threat. The team is commended for exemplary actions to safeguard the public and each other and for unwavering commitment to duty."

Westchester County Executive George Latimer applauded Malone for his courage and dedication to the people of the County, adding that Westchester is safer because of Malone’s heroism.

Gleason noted that County Police detectives are assigned to a variety of other joint federal-local task forces. “These partnerships are force multipliers that help us to protect the people of Westchester,” he said.