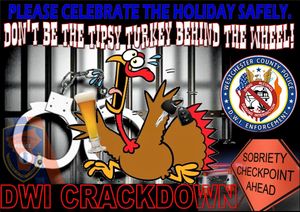 Beginning Wednesday, County Police will be participating in a statewide STOP-DWI enforcement campaign that will continue through the Thanksgiving weekend. In addition, uniformed officers and tactical teams will be stepping up inspections and critical infrastructure patrols around railroad and bus stations, major retails hubs in Mount Kisco and Cortlandt, houses of worship and other sensitive locations.

“Thanksgiving is a time of year when a great many people are traveling through Westchester’s airport or on our parkways,” County Executive George Latimer said. “The County Police will be deploying extra resources to ensure that everyone can reach their destinations as safely and efficiently as possible. Our police will ensure that all traffic rules are enforced and they will be there to help any distressed motorists.”

Public Safety Commissioner Thomas A. Gleason said the DWI enforcement effort will include roving patrols and sobriety checkpoints along the Bronx River, Cross County, Saw Mill and Hutchinson River parkways as well as in several municipalities.

“We have seen an increase in impaired driving in recent years in the days around Thanksgiving,” Gleason said. “I remind everyone that there is zero tolerance in Westchester when it comes to driving under the influence of alcohol or drugs.”

Under this initiative, more police officers may be observed, including heavily armed tactical teams.  The public is reminded that this increased presence is not in response to any specific threat but is simply part of ongoing security and counter-terrorism efforts.