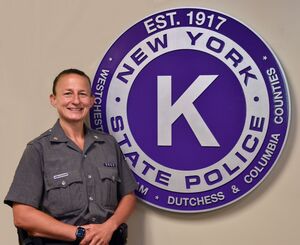 Major Rohde began her career with the State Police when she entered the New York State Police Academy on May 10, 1999.  Major Rohde was first assigned to patrol the western corridor of the Hudson Valley in Troop F after graduating the academy.  She was soon promoted to the rank of Sergeant in 2005 and remained in Troop F until assignment to the Governor’s Protective Services Detail in 2010.  In 2012 she was promoted to the rank of Lieutenant and initially assigned to the Professional Standards Bureau.  Soon after Major Rohde transferred to the Computer Crimes Unit where she served as the New York State Internet Crimes Against Children Commander.

Major Rohde received her bachelor’s and master’s degrees from SUNY Albany in Criminal Justice.  Originally from Long Island, she has resided in the Catskills for the past twenty-five years with her two children.

“I whole heartedly believe in the Oath I have taken and will continue to serve this State, its citizens, my coworkers, and the people I have been blessed to lead with the utmost honor, integrity, respect, and compassion.  I’m truly grateful for this opportunity and look forward to leading the outstanding men and women assigned to Troop K,” stated Major Rohde.

Major Rohde’s appointment to Troop K Commander is effective May 27, 2021.  She replaces Major Michael J. Drake who will go on to serve the Division of State Police in the Professional Standards Bureau, at Division Headquarters.