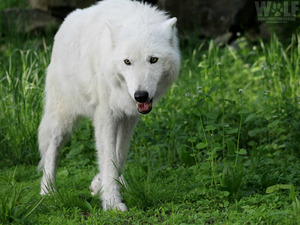 The Wolf Conservation Center (WCC), located in Katonah, NY, has sadly reported the passing of Atka, the oldest ambassador wolf at WCC, he arrived at in Katonah from Minnesota when he was just 8 days old. His comrades at WCC considered Atka more than a leader in the world of wolf conservation, but a superstar.

In a letter to WCC supporters and Atka fans, WCC said:

It is with deep sorrow that we share news about the most magnificent wolf we have ever known. Atka died in his sleep early this morning; he was 16 years old.

His passing was painless and peaceful with his family surrounding him. While Atka leaves a hole in our lives so big that words can't describe it, his impact on wolf conservation persists and can not be overstated.

Atka is an Inuit name meaning guardian spirit, and his brilliant spirit lives on in those whose hearts he warmed, minds he opened, and souls he touched.

He instilled compassion, understanding, and awareness to the hundreds of thousands of people he met over his storied career. We will be better and do better because Atka lived. He will empower us to continue the fight to safeguard the wild legacy he leaves behind.

A memorial to celebrate the life of Atka will be announced later this week.