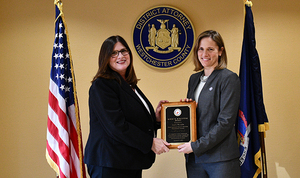 The Morgenthau Award, established in 2009, honors one Assistant District Attorney from each of the four regions of New York State whose professional accomplishments, honesty, integrity and commitment to the fair and ethical administration of justice exemplifies the high standards Robert M. Morgenthau demonstrated during his tenure as New York County District Attorney.

“Laura Murphy is the kind of prosecutor that every District Attorney hopes to have in their office – one who acts with integrity, one who willingly takes on the most difficult cases and one who never stops fighting for justice for victims,” DA Rocah said. “Since beginning her career in the Westchester County District Attorney’s Office in 1988, Laura has spent her career working on behalf of crime victims and serving the Westchester community with dedication, fairness, and immense sensitivity. She is the shining example of so much of what Robert M. Morgenthau represents, and I am so proud and honored she is a part of my Office.”

“I want to thank my Office for nominating me for the Robert M. Morgenthau Award and DAASNY for selecting me because there are so many deserving prosecutors out there who dedicate their time to the jobs that we do,” Murphy said. “Working for the Westchester County District Attorney’s Office for the last 34 years has been the greatest job and Westchester is an unbelievable place to work. I have the support of so many colleagues who are now my friends. Coming to work every day is such a joy, and I just want to thank them for being part of my world here in Westchester.”

Murphy began her career in 1988 in the Westchester County District Attorney’s Office with a rotation through the Appeals Division and the Local Crimes Court Division. Between 1994 and 2010, Murphy was assigned to the Special Prosecutions Division, where she rose through the ranks to become the Bureau Chief of the Child and Elder Abuse Bureau. During her tenure, she secured guilty verdicts on multiple high profile child abuse cases and never wavered in her commitment to seeking justice for the most vulnerable members of the Westchester community.

Murphy has hit the ground running in her new role. In conjunction with New York State Police and WCDAO Investigators, she spearheaded the investigation into the 1982 cold case murder of Kathleen McCormack Durst, which resulted in her husband, Robert Durst, being indicted for Murder in the Second Degree on Nov. 1, 2021. Also in November, Edmund Pennil was charged with Manslaughter in the Second Degree for the 2017 hit-and-run death of Bronx resident Tremayne Williams.

In Jan. 2022, Murphy aided the Yonkers Police Department in arresting and charging Wanda Veguilla, and others, in connection with the Aug. 2012 murder of Pamela Graddick, a Bronx woman who was shot and whose body was left in a wooded area near the Sprain Brook Parkway in Yonkers.

In addition, Murphy worked with the Mount Vernon Police Department, Westchester County Department of Laboratories and Research and the Federal Bureau of Investigation to uncover the identity of a homicide victim who was murdered in 1988 and found dead in Mount Vernon. Using DNA testing and investigative genealogy, the victim, formerly known as “Jane Doe Mount Vernon,” was identified as Veronica Wiederhold. This significant development provided a measure of closure for the victim’s family after 33 years, and furthers the possibility that Veronica’s assailant will be brought to justice. Murphy, collaborating with law enforcement, also created a composite sketch of a victim found shot dead in a wooden chest in Hastings-on-Hudson in 1978 and shared it with the public in an effort to identify the victim.

Under Murphy’s leadership, the Cold Case Bureau currently has seven active investigations in Mount Vernon, Yonkers and Northern Westchester, and is committed to investigating the more than 100 cold cases in Westchester County.

“Laura’s willingness to take a fresh look at hard cases exemplifies her tenacity to see each investigation through to its end and the commitment she makes to every victim to never stop working on their behalf,” DA Rocah said. “Like Mr. Morgenthau, Laura has an impressive work ethic, a well-earned reputation for fairness and integrity, and consistently demonstrates even-handedness in her prosecution of cases, irrespective of the nature of the crime. Ultimately, Laura never loses sight of her responsibility to the community and is a true public servant in the spirit of Robert M. Morgenthau.”