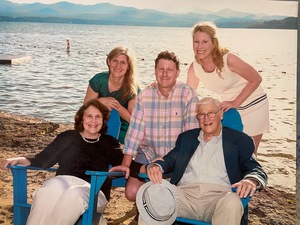 The Lewisboro Baseball Association Gratefully Announces the Donation of $100,000 from the Long-Time Lewisboro Vouté Family in Loving Memory of Arthur Vouté

The Lewisboro Baseball Association (LBA) gratefully announces the donation of $100,000 to the organization from the Vouté family of South Salem. The donation will be in memory of long-time resident Arthur Vouté. The gift will fund dugouts, on-field batting cages, sound system, signage and field work, according to documents and LBA President Jim Moreo.

"We are so incredibly thankful to the Vouté family for this meaningful contribution to our kids in Lewisboro and surrounding towns to make our field at Lewisboro Town Park again the gem of a diamond it once was," said long-time LBA Board Member Adam Giardina.

"When Rosanne Vouté came to me earlier in the year wanting to make a substantial contribution to the town in Art's memory, the more we spoke - given her husband's time in baseball, and the many hours her son Chip spent on the Town Park field - it seemed the natural thing was to make the donation to the LBA," said Bill Bongiorno, long-time LBA Head Coach.

"We both got very excited about this possibility. It has been an honor for me to have gotten to know the Vouté family and to learn more about Art's life, while facilitating this process," said Mr. Bongiorno. "This is truly a generous gift to the town and our families."

According to Rosanne, "Art loved South Salem and this community, he loved baseball, and I know he'd be very happy to know this gift will be encouraging so many children to enjoy the game. The whole family feels it as a perfect way to honor Art and to say 'thank you' to the town he loved."

The LBA is looking to have a ground-breaking ceremony this fall with the Vouté family and Mr. Bongiorno and the hope is to have the work completed prior to opening day 2022.

Arthur J. Vouté, 85, of South Salem NY, and Newport RI, passed away peacefully at his home in Newport on Thursday August 27, surrounded by his children, grandchildren, and wife of 55 years, Rosanne (O'Neill) Vouté. Arthur was the son of Arthur and Josephine Rolleston Vouté. He was raised in Riverdale, New York.

After graduating from Villanova University and Fordham Law School he began his career as a trial lawyer which lasted over fifty years. He was a founding partner of Vouté, Lohrfink, Magro & McAndrew in White Plains, NY. Arthur was passionate and dedicated in his craft. He had many professional distinctions and was most proud of being inducted into the prestigious American College of Trial Lawyers.

The Catholic faith was a centerpiece of Arthur's life and gave him comfort and purpose throughout his days.

As a young man, he enjoyed all sorts of sports. His life could have taken a different turn if his tryout as a pitcher for the NY Yankees had a different result! He also had a lifelong love of competitive handball. Art had an intense curiosity, represented in a wide range of intellectual interests. He always had a camera on-hand for special occasions, a harmonica in his pocket for a singalong, and you would often see him accompanied by one of his many beloved dogs. For anyone who knew Arthur well, his notorious sweet tooth drove him to ever more creative ways of sneaking cookies when his wife wasn't looking, a credit to his intellect.

Arthur was blessed with a large, loving family and was never happier than when in their company. The Vouté home was always open to their children's friends who needed a place to stay, creating a group of family friends who look to Art and Rosanne as second parents.

He was preceded in death by his dynamic younger brother, William Vouté.

Memorial donations may be made to the Maryknoll Sisters, Ossining NY.