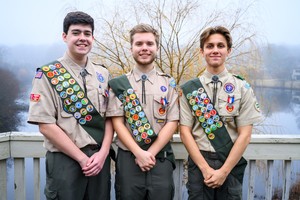 Table full of Lewisboro, County and State Proclamations as well as signed congratulatory letters from three United States Presidents, two Supreme Court Justices, Congressmen and Famous Businessmen Bill Gates and Michael Bloomberg, to name a few.  Members of Congress arranged for the flag of the United States of America to be flown over the Capitol in December 2019 in recognition of Patrick, William and John achieving the rank of Eagle Scout.

The program began with the Presentation of the Colors, followed by a singing of America the Beautiful by William Skyler Lee.  The Reverend Joseph J. Campo of St. John’s Episcoipal Church in South Salem led the invocation, which was followed by a welcome and introductions by BSA Vista Troop 101 Committee Chairman Richard Healy and Tom Fuller, Scoutmaster.  The scouts were then awarded their coveted and hard earned Eagle Scout Medals.

Rich Healy gave each scout their congratulatory letters and led the closing of the ceremony, which ended with Taps being played on the bugle by Life Scout Tejas Chimata.

Patrick Bates is 18 years old and his final Board of Review was on January 16, 2019. Patrick’s Eagle Service Project was converting the offices of the Lewisboro Town Historian into a Historical Visitors’ Center at Onatru Farm, South Salem, New York. This government building was donated in 1973 by the original owning family who resided there since the 1700’s. The donation papers stated that the farmhouse be used only for “historical purposes” and that the forty-acre area surrounding the dwelling remain unchanged. Patrick’s project involved the complete restoration of two large rooms in the main farmhouse. The back room was renovated for the purposes of storage and preservation of the many artifacts that have been gathered over the past 200 years and the front room is for visitor viewing. The front room was originally a music room and the family’s piano is on display. The mission of the project was to compel interest throughout the town for Onatru Farm’s history and that of the town itself. The two rooms have been restored with care and historical accuracy including paint colors, wall trim, crown molding and floor finish.

William (Billy) Skyler Lee is 18 years old and completed his Eagle Board of Review on May 29, 2019. Billy’s project was the replacement of an active pedestrian bridge in Ward Pound Ridge Reservation, Westchester County, New York. The heavily trafficked 13-foot bridge was upgraded from a 24-inch wide plank to a four-foot wide bridge with hand rails. Billy led his troop in moving large stones by hand and pry bars to slowly and methodically piece together two-level foundations to support the bridge. The bridge itself was built almost entirely with hand tools. After completing the bridge, more boulders were moved to create a smooth, natural walkway atop a very jagged stone wall adjoining the bridge. One challenge of the project was leaving a safe working bridge in place at the end of each work session.

John O’Dwyer is 17 years old and completed his Eagle Board of Review on June 12, 2019. John’s Eagle Service Project involved constructing 16 raised garden beds in a 60 x 40-foot area at the Community Garden Club at Onatru Park, in South Salem, New York. John designed his garden with a focus on the elderly and the environment. He used linseed oil on the wood surrounding each bed rather than pressure treated wood for a natural source of wood preservation. Also, he installed a four-foot-wide path for easy access and placed wood chips along the pathways. The raised beds were very much appreciated by the Garden Club as they allowed its elderly members who have

difficulty bending or kneeling, to sit on the edge of the raised beds as they work. Having raised beds minimizes soil erosion and provides weed control. The raised versus at beds allow gardeners to plant additional healthier and stronger plants.

All three scouts held fundraisers to purchase supplies and obtained donated materials such as paint, tools, gravel, plants and top soil from local construction and landscaping businesses to be able to successfully complete their Eagle Service Projects.

The Eagle Scout Projects would not have been possible without the assistance and support of the Boy Scouts and parents of Vista Troop 101, as well as their uniformed leaders both past and present.