Prima Materia: The Periodic Table in Contemporary Art Opens February 5 at The Aldrich 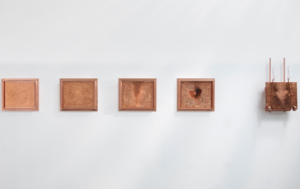 Prima Materia will be on view at The Aldrich Contemporary Art Museum from February 5 to August 27, 2023.

While the basis of the exhibition is science, through expansive curatorial choices, the project will reveal the material basis for sociological, emotional, political, and even spiritual subject matter. Artists use specific materials for a reason, quite often for their metaphorical potential, and Prima Materia will explore hard facts as well as alchemical conjecture. A subtext that will be explored in the project is resource extraction, which will be incorporated through works that speak about the mining and refining industry and its legacy. As a society we are woefully unaware of the trail followed by common materials as they go from the earth into our hands, and the exhibition will give the viewer a greater appreciation of the material world, reveling in both the beauty and convoluted history of our understanding and manipulation of physical matter.

All art forms, even music and literature, are partially dependent on the material world. The visual arts, however, are more linked to materialism, as the field is primarily defined by objects. Even digital media is contingent on physical matter, whether it is the silicon that makes the microprocessor, or the lithium that is contained within a cell phone battery. Humans have speculated for thousands of years on how the world is comprised. “Prima materia” was a concept first put forth by Aristotle to describe the primitive, formless base for all matter.

Plato later expanded on this in his treatise Timaeus, writing: “The body of the world is composed of four elementary constituents, earth, air, fire, and water, the whole available amount of which is used up in its composition.” The alchemists of both medieval Europe and those of the Islamic Middle East and North Africa were the first who began to doubt the primacy of the ancient four elements. Beginning in the Renaissance, their speculation led to the transition of the practice of Alchemy to Chemistry. Included in the “origins” section of the exhibition is Robert Williams' installation Theatrum Chemicum Britannium – The Alchemist’s Shack. Based on the life of Eirenaeus Philalethes (Geroge Starkey), a practicing Colonial American alchemist who attended Harvard College in 1643, Philalethes’ work went on to influence European scientists such as Robert Boyle and Isaac Newton. The names given to the eras in human history—stone, bronze, iron, and now silicon—are indicative of how our understanding of matter has transformed culture.

Prima Materia: The Periodic Table in Contemporary Art is curated by independent curator and artist Richard Klein, The Aldrich’s former Exhibitions Director, and will be accompanied by a 90-page softcover catalogue featuring an essay by Klein.