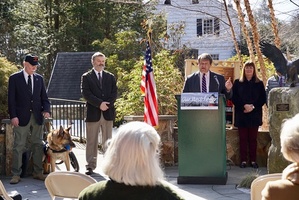 On “National K-9 Veterans Day,” Westchester County Executive George Latimer announced that more than $30,000 has been raised by Friends of Lasdon Park & Arboretum, to erect a memorial statue dedicated to hero dogs in the military. The statue, a life-sized sculpture based on a World War II War Dog named “Chips,” is planned for the Trail of Honor at Lasdon Park. The sculpture will pay tribute to the thousands of service dogs who have fought to protect our nation’s soldiers in violent war zones. Nero, an impressive German Shepard who served in Iraq, was present for the announcement along with his owner John Conley, a Vietnam and Afghanistan War Veteran.

Westchester County Executive George Latimer said: “There are thousands of service dogs who have risked it all to protect our military personnel, while they are fighting to protect us. Many of these dogs continue to serve long after they’ve returned home, helping our disabled veterans. The statue of Chips is a small way that we all can pay tribute to our military dogs, and honor the bond that exists between our soldiers, marines, airmen and sailors, and their K-9 companions.”

The money for the statue has been raised by Friends of Lasdon Park & Arboretum to honor the family of Edward J. Wren of Pleasantville, who brought Chips home after the war. Chips was a German Shepherd-Collie-Siberian Husky mix who trained for the United States Army, and is reputedly the most decorated war dog from World War II. Military service dogs are tasked with detecting bombs, drugs and weaponry, and bring life-saving capability to fight against terrorism.

Director of the Westchester County Department of Consumer Protection Jim Maisano said: “Wherever we are, dogs have been with us. And in the military, they play a key role. I think this statue is going to be wonderful, and I’m so excited that it is going to be here at our beautiful Lasdon Park. This statue will be something that every single Westchester County resident will enjoy, and be proud of.”

Director of Westchester County Veterans Affairs Ron Tocci said: “This is really a special day. So many people that are dog people are blessed with the opportunity to live with a K9, and develop that special bond. But especially when you are in the military, you realize just how loyal, loving and faithful these war dogs are to that one person.”

Commissioner of the Westchester County Parks Department Kathy O’Connor said: “This statue is a wonderful addition to our Parks System that will be placed on our Trail of Honor on June 22. I want to thank the Friends of Lasdon for falling in love with this facility, and supporting us when we weren’t able to do certain things that we wanted to do. This is a wonderful day.”

Superintendent of Lasdon Park Ted Kozlowski said: “It was an honor for my staff and I to help raise the funds to establish a long overdue tribute to our four-legged veterans.”

John Conley, a Vietnam and Afghanistan War Veteran, who adopted his service dog Nero when he was in Afghanistan said: “It’s a privilege to be here to honor these K9 warriors who give so much.”

The statue is being created by artist Lena Toritch, MFA, a sculptor whose stunning pieces have been placed throughout the country for military and police personnel. An unveiling date of June 22, 2019 is planned at Lasdon Park.