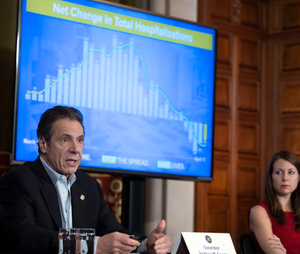 Amid the ongoing COVID-19 pandemic, Governor Andrew M. Cuomo today called for federal coordination of the supply chain to bring testing to scale so states can perform begin reopening functions.

The Governor is also issuing an Executive Order allowing New Yorkers to obtain a marriage license remotely and allowing clerks to perform ceremonies via video conference, a practice that is banned under current law. Many marriage bureaus have temporarily closed as a result of the COVID-19 pandemic, preventing New Yorkers from getting a marriage license during the current health emergency; the Executive Order will temporarily suspend a provision of law that requires in-person visits.

Governor Cuomo also reiterated the bipartisan call from the National Governors Association for the federal government to provide $500 billion in unrestricted aid to the states to help stabilize the economy and allow the states to perform reopening functions. The federal government has passed three bills to address this crisis, including the federal CARES Act, all of which contained zero funding to offset drastic state revenue shortfalls.

"Why is testing so important? Testing is how you monitor the rate of infection and it's how we find people with the virus and trace their contacts," Governor Cuomo said. "The challenge is to bring testing up to scale. We asked the top 50 labs in the state what they would need to double their testing, and they all said the same thing: they need more chemical reagents. We need the federal government to oversee the supply chain and help get labs what they need."

Finally, the Governor confirmed 7,090 additional cases of novel coronavirus, bringing the statewide total to 236,732 confirmed cases in New York State. Of the 236,732 total individuals who tested positive for the virus, the geographic breakdown is as follows: