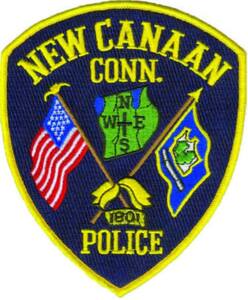 The cyclist, a 56-year-old man from Ridgefield, suffered abrasions and other unknown injuries and was transported to Norwalk Hospital ER by NC EMS for treatment and further evaluation, police say.

According to New Canaan police, based on witness statements, a possible suspect vehicle is a grey-colored older model sedan or SUV with New York license plates possibly beginning with GHE. As a result of the subsequent investigation into the above incident by the New Canaan Police Investigative Section, Christopher Lynch, age 51, of South Salem was identified as the operator of the suspect vehicle seen leaving the scene of the crash.

Through forensic evidence collected from Lynch’s vehicle and video surveillance obtained from the area of the crash, an arrest warrant was obtained for Lynch.

Police say that yesterday, July 13, Lynch surrendered himself to the New Canaan Police for processing of the charges [passing at an unsafe distance and evading responsibility/serious physical injury].