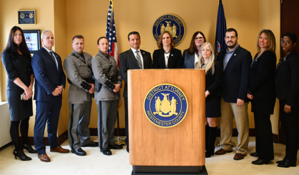 Shortly after taking office in Jan. 2021, DA Rocah’s newly formed Cold Case Bureau and the New York State Police resumed the investigation into the disappearance of 29-year-old Kathleen Durst. As a result of the extensive and thorough investigation, Robert Durst was charged by a Westchester County Grand Jury in an indictment on Nov.1, 2021, with Murder in the Second Degree.

“While nothing can provide the transparency of a public trial, that option is unavailable given Robert Durst’s recent death. In an effort to provide as much transparency as possible, my Office is issuing an Investigative Report that summarizes facts, not subject to grand jury secrecy, that were gathered during the investigation into the disappearance of Kathleen Durst and sheds some light on why it took nearly 40 years to charge Robert Durst with her murder,” DA Rocah said. “These are all things about which there has been much speculation over the years and I believe that sharing facts with the public, where possible, is the best way to enhance public trust in our criminal justice system.”

The report provides details about the investigation into Kathleen Durst’s disappearance conducted in 1982, and how statements made by Robert Durst soon after Kathleen’s disappearance led police to initially believe that she was last seen in Manhattan. Those statements were discredited through the statements of other witnesses, and later by Robert Durst himself, while additional witness interviews revealed information about multiple alleged incidents of domestic violence by Robert Durst against Kathleen Durst. In addition to information learned from witness interviews, the report also details some of the physical evidence recovered during the investigation, including a handwritten note that was found in the South Salem home shared by the couple. Despite this evidence, the case went cold.

As discussed in the report, New York State Police Investigator Joseph Becerra and the Westchester County District Attorney’s Office resumed the investigation into Kathleen Durst’s disappearance in 1999. During this time, Inv. Becerra debunked the belief that Kathleen Durst was seen in Manhattan on the night she disappeared, which shifted the focus of the investigation away from the narrative suggested by Robert Durst in the period after Kathleen disappeared. Investigators conducted numerous interviews during this period, but were unable to interview Susan Berman, Durst’s friend, before she was murdered in December of 2000.

The report also discusses crucial facts and evidence that were revealed during the production of the HBO documentary “The Jinx” and Robert Durst’s prosecution for the murder of Susan Berman in Los Angeles, which resulted in his conviction on Sept.17, 2021. Shortly thereafter, Durst was indicted for the murder of Kathleen Durst, nearly 40 years after her death.

“Those of us in law enforcement, who are always seeking to better serve victims, can and should look at how this case was handled and what, if anything, we can learn about the crucial early stages of criminal investigations when individuals with status, wealth and power are implicated,” DA Rocah said. “By learning from past investigations, we can better assure the public that no one is above close scrutiny of law enforcement and that domestic violence victims, like Kathleen Durst, can be saved before their abuse ends in death. In the end, I hope that the charges that were filed in this case send a powerful message that no one is above the law and no victim’s case should be forgotten.”